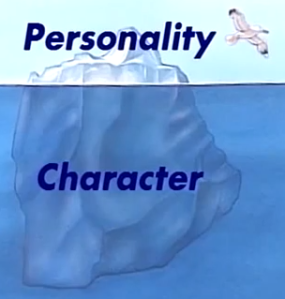 Leah is fun to be with, great sense of humor, and knows how to laugh through the challenges that come her way. She’s confident and super friendly and has lots of friends. But what is she really like? Is she reliable and responsible? Does she have integrity? Is she kind?  What does she feel is her role in the community?

Character is confused with personality, presumably because both character and personality are reflected in a person’s behavior.

Both are important in a shiduch.  We bring this up because oftentimes, the character is somewhat overlooked as both personality and character are blurred into one. And it is critical it is to separate them.

Personality is easy to read; we see people as funny, friendly, extroverted, energetic, optimistic, confident, influencing, overly serious, lazy, negative, or shy—very soon after meeting them.  Personality is who you are on the outside; your outer appearance and behavior.

On the other hand, your character is what you really are at a deeper level. Character traits are the attitudes and beliefs that drive your choices for your life, family, and community; they are closely related to your moral and ethical values by which you live your life. Honesty is a character trait – are you honest or not so much?  Other character traits include: integrity, virtue, courage, leadership, responsibility, loyalty, reliability, and kindliness.

Character is developed through our life experiences and what we learn or don’t learn on that journey – determining whether we develop a strong character or a weak one.  Personality is more of a predisposition, traits with which you were born.

When dating, it is fairly easy to get to know someone’s personality; getting to know their character can take more time to puzzle out. It takes a specific circumstance for someone’s character to show up. You’d need to be in a certain situation to observe one’s honesty or courage.

We humans have an uncanny tendency for noticing attractive personality traits and inferring out of them the presence of positive character traits (that is, if someone is outgoing, confident, and fun we’re more likely to think they’re honest, moral, and kind). That assumption can get us into trouble.

We unconsciously link personality to character for two main reasons: 1. we want to like people we already like, and 2. the most reliable way to assess a person’s character is usually too time consuming.

So what can you do to get to know the other’s character?  Your can’t really manufacture scenarios to test for character. And you can’t really expect unbiased answers if you ask your date directly.

The best way is to ask others about her or him.  By asking powerful questions. “Please describe one of Leah’s strongest character traits, and how you have experienced that.”  Ask for examples from the past, “Has it ever happened that Leah had made a commitment and then was presented with a better opportunity; what did she do?”  rather than hypotheticals such as “What might Leah do when she has a commitment and then a better opportunity comes up?”

You can’t ask it directly, “Does Yossi lie?”  Rather, you might ask, “Everyone has character weaknesses; what, in your experience, is one of Yossi’s bigger weaknesses?” The implication here is that everyone has weaknesses, so it’s unreasonable to expect the answer to be “none.” It’s harder to make up a weakness on the spot than to tell the truth about a weakness that the reference actually perceives; so you’re more likely to get a more honest answer.

Evaluate what the person is saying it and how she says it. Pay attention to their tone of voice, demeanor on the phone and direct answers. Is she enthusiastic or hesitant?

And then, ask a few people. If you are getting similar answers from a few people, there must be some truth to it, especially if it is coming from people who know her from different contexts.

While personality is fairly easy to get to know, character is a bit harder. And that is why we must ask others to help us get to know her character.